Most of the toddlers love playing with little cars, trucks, trains and other vehicles. Either it's a free play or incorporated into another activity (like building a city scene or such), they love things that move! And to make things more realistic and slowly introduce learning meaning of traffic signs to them, you might consider purchasing them a set of toy traffic signs

to accompany their vehicles and mats. If you want, you can make them! Not hard at all! And really inexpensive! :) Here is a little tutorial to guide you through all the steps!

What you'll need (supplies):
- 1 piece of white cardstock
- 1 piece of plain printer paper
- 40-50 toothpicks
- craft glue (or any other multipurpose glue)
- glue gun and glue sticks
- 40-50 smallest coins you can find around

Print out a set of traffic signs from online on cardstock and cut it out! I've used this printable but you can use which ever suits you. Just spend a minute or two on Google search. 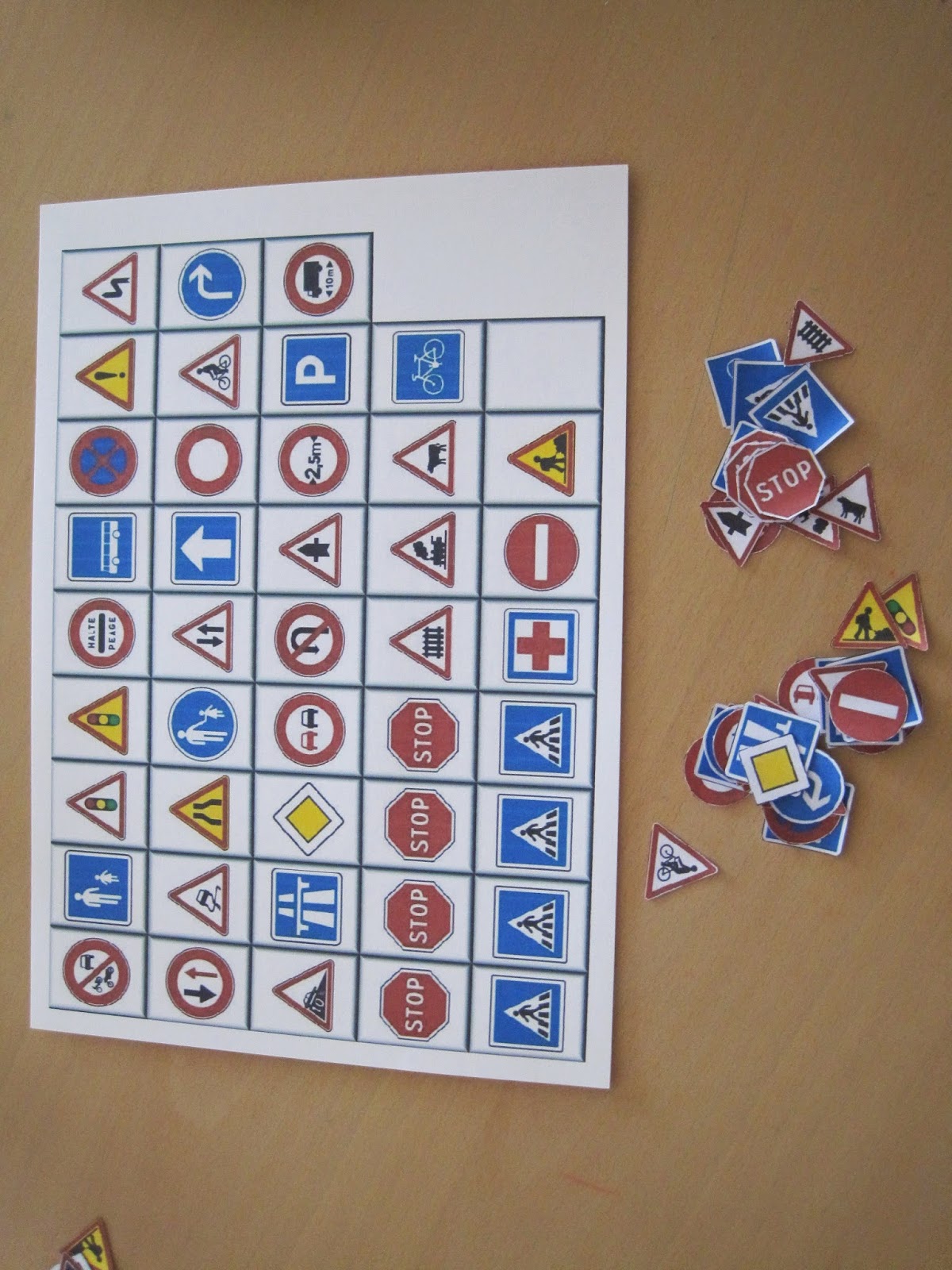 Use craft glue to glue cut out sign to paper and place toothpick in between cardstock and plain paper. Press hard for glue to spread and stick to toothpick. We don't want toothpick to fall out. 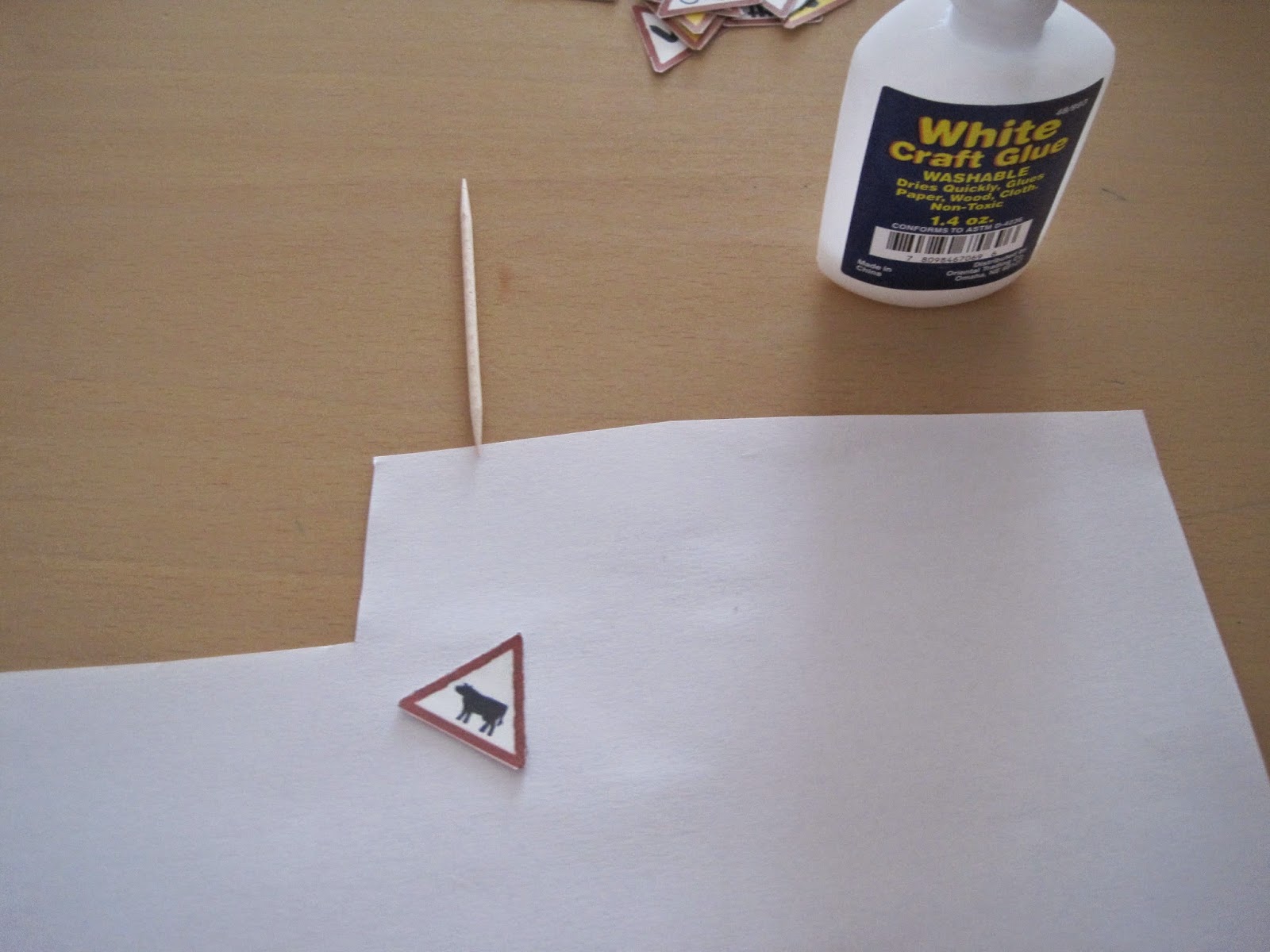 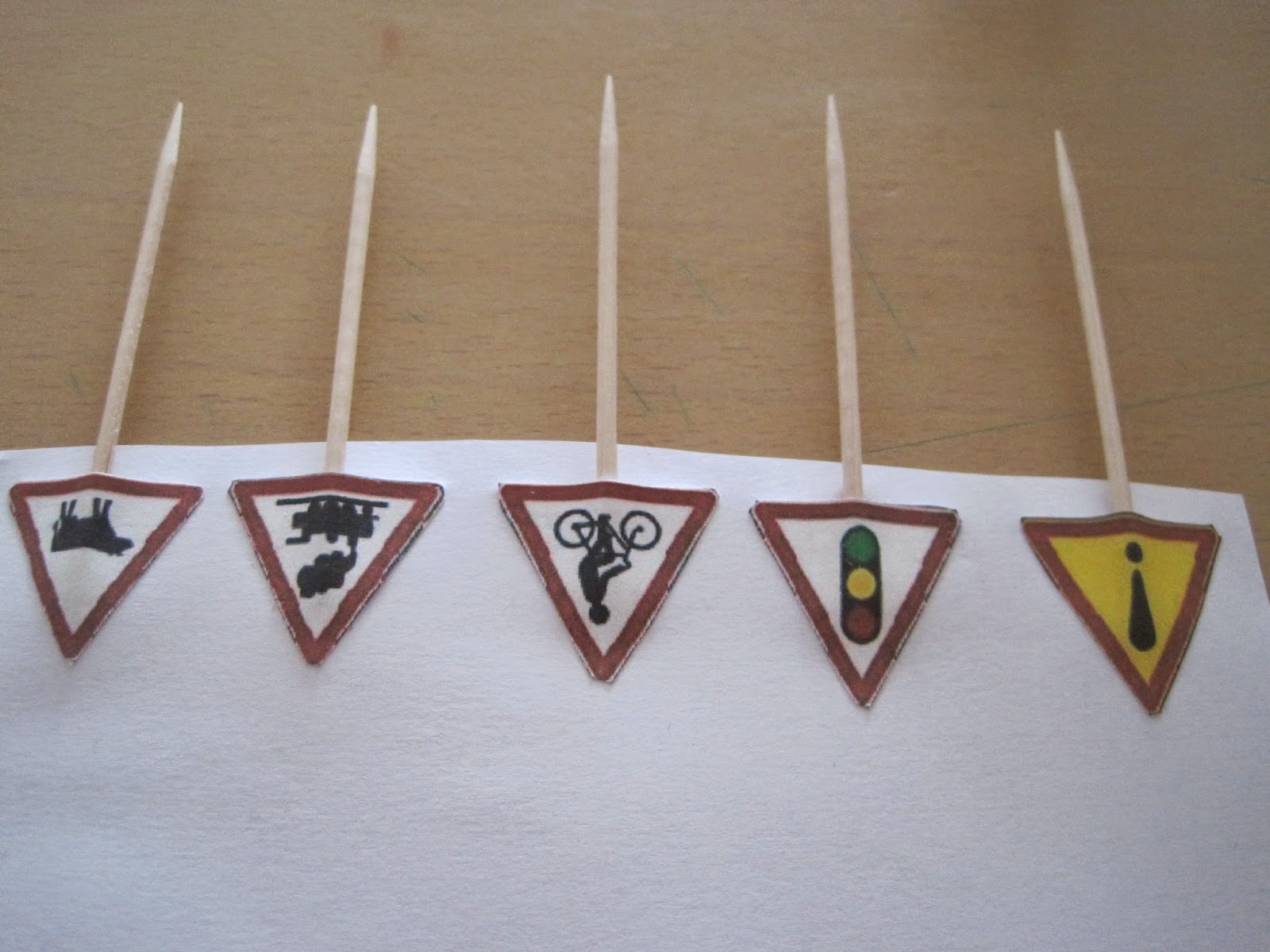 Cut out each of the signs once more and give additional pressure to the paper and cardstock to make sure they are glued right around toothpick. You should get something like this: Prepare glue gun. While you're waiting for a gun to become ready, take scissors and cut out spikes from toothpicks (bottom part) - we need them as flat on the bottom as possible. Then put small coins on flat surface (I've used cutting board from kitchen so I wouldn't damage my table) and put as much glue to the surface to form a sphere (like on the picture bellow). Give it few seconds, then place traffic sign at the middle of the coin. Hold it as straight as you can until you see that glue changed color (became blurred). At that point, you can place it aside and continue with next sign. After a while, I managed to get into a roll of putting together 4 signs at the same time. It just needs a bit of practice. :) 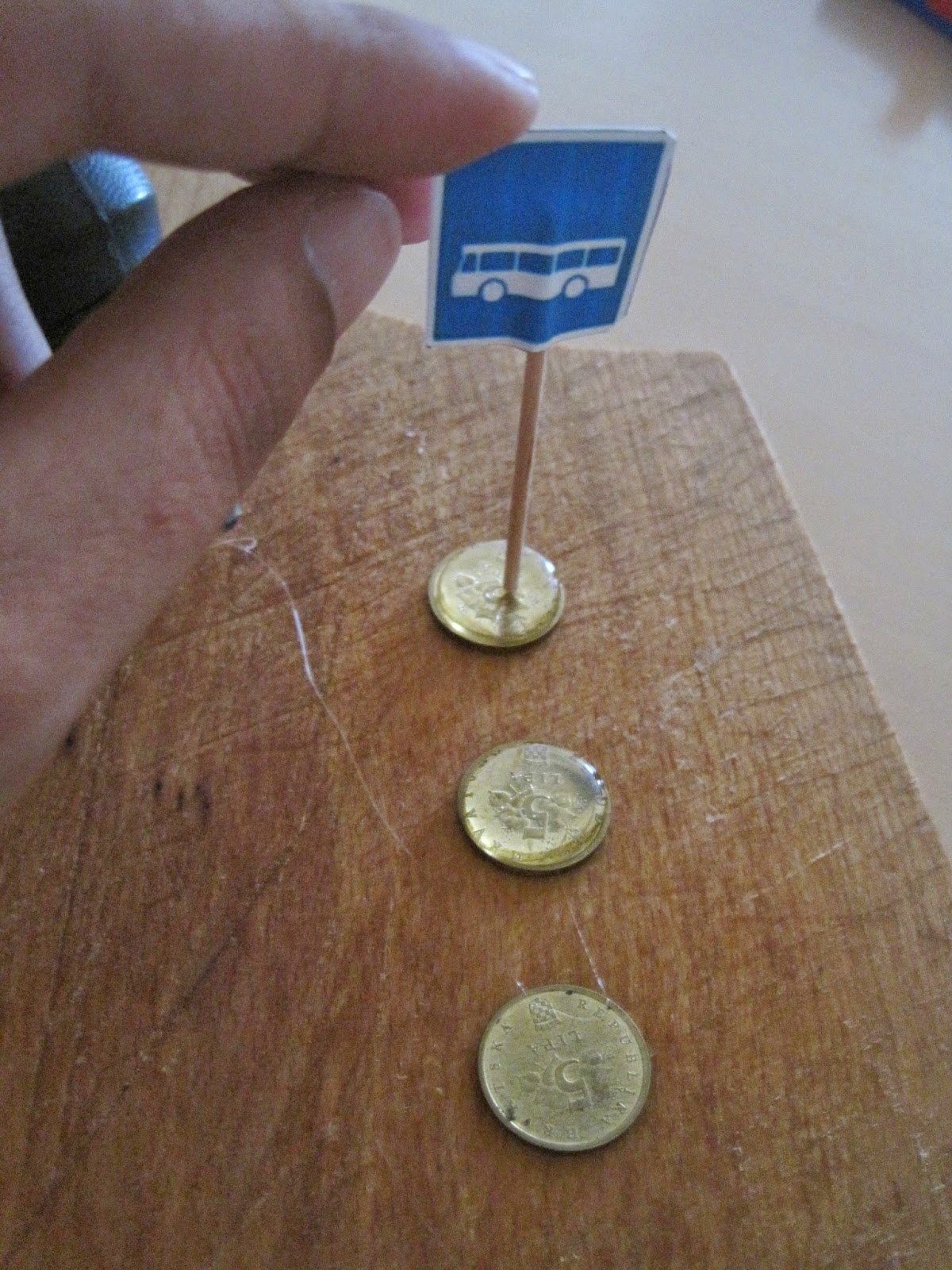 If you don't have glue gun, or don't want to use it for this project, alternative could be to use cut out styrofoam cubes and stick and glue traffic signs in the middle of them. But since these traffic signs are really very light, I wanted to make base heavier and more stabile. 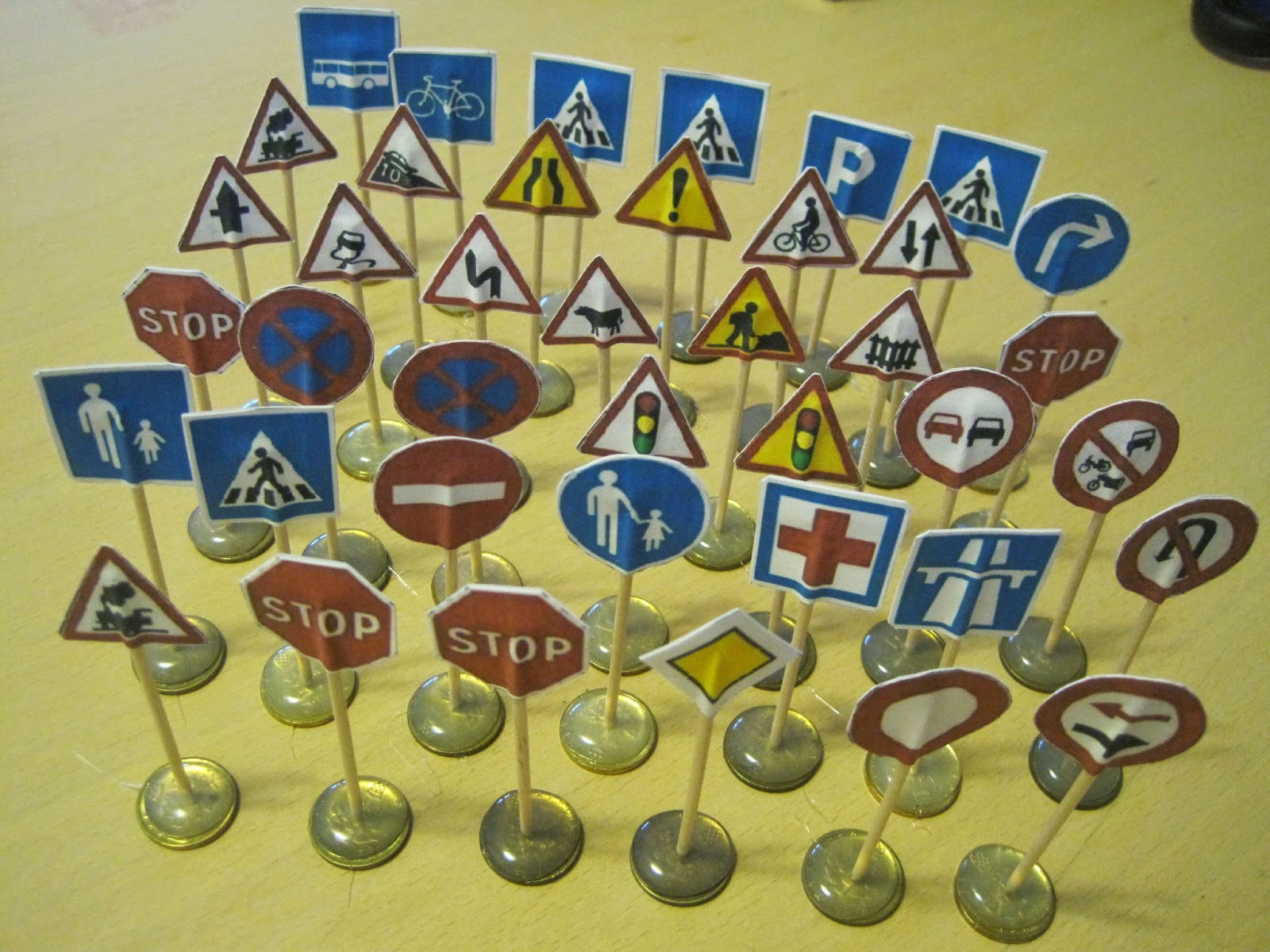 All ready to regulate that traffic jam that is about to happen on our play pretend streets! :)

Would you be making one for your tots? Or you have some alternative? We would love to hear all ideas!